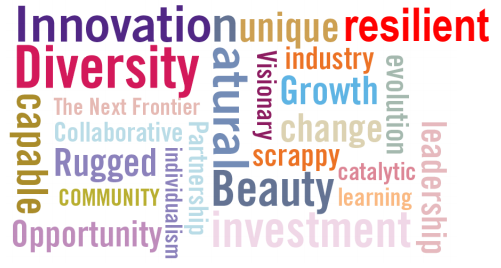 Southern California’s Inland Empire (San Bernardino and Riverside counties) comprises one of the fastest-growing population centers in the United States. Located 40 miles east of Los Angeles, the IE is rich in diversity, culture, history and economic opportunity. It’s also home to innovative, resourceful, mission-driven nonprofit organizations that work in partnership to transform lives, communities and the region as a whole.

While significant challenges remain, the Inland Empire’s nonprofit community has shown the collaboration, creativity, commitment and capacity needed to positively impact lives throughout a region of 4.5 million people. What these resilient, highly efficient organizations need is capital – the financial support that will allow them to help California’s newest population center fulfill its extraordinary promise and potential.

For foundations, government grantmakers and donors looking to make a difference, the IE’s 11,000 nonprofits and the growing region they serve offer a unique opportunity. The support of elected leaders, businesses and forward-thinking educational institutions helps ensure that philanthropic dollars spent here will achieve the desired outcomes.

Philanthropic foundations have significantly increased their investment in the Inland Empire over the past several years, from $61.3 million in 2013 to $115 million three years later. Foundational investment coming in from outside the region more than doubled during this period, from $46 million to $98 million. Even so, the IE continues to lag significantly behind the rest of California when it comes to foundational support per capita. The Guillermo J. Valenzuela Foundation is proud to be part of the solution and the movement of attracting more philanthropic dollars to the Inland Empire.

The IE can embody a new California Dream – one where the opportunity for a better life is very much within reach. Challenges or not, more than 120 people a day are moving to the IE. Join them and us as we seize the California Dream!

We are the IE.

We are the New California.

120+: Number of people moving into the IE every day.

7 million: Projected population of the IE within 30 years.

1 in 9: Proportion of California residents who live in the Inland Empire.

27,000: Number of square miles comprising the IE – larger than 10 states. San Bernardino County is the largest geographic county in the U.S.

52: Number of cities in the two- county region.

56: Number of School Districts in the two-county region.

26%: Percentage of the population in San Bernardino and Riverside Counties under the age of 18. The state and national averages are less than 23%.

68%: Percentage of IE residents who are people of color.

51%: Percentage of IE residents who are Latinx.

41%: Percentage of IE households in which a language other than English is spoken at home.

20%: Percentage of adults in the IE who have a four-year college degree or higher (versus 32% for California and 30% for the nation as a whole). 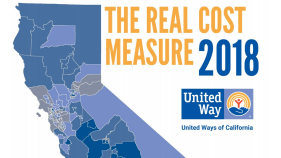 given household type in a specific county. The analysis showed San Bernardino and Riverside Counties continuing to fall behind when it comes to individuals and families being able to meet basic costs of living.

36%: Percentage of IE households that fall below the Real Cost Measure (lack income to meet their basic needs). This is 3 percentage points higher than the California average.

369,301: Number of households in the IE that fall below the Real Cost Measure.

$68,945: Income needed to sustain a family of four (2 adults, 1 infant, 1 school-age child) in Riverside County. Such a family would need more than 3 full-time minimum-wage jobs to achieve economic security.

$51,922: Income needed to sustain a family of four (2 adults, 1 infant, 1 school-age child) in San Bernardino County. Such a family would need more than 2 full-time minimum-wage jobs to achieve economic security.

42%: Percentage of San Bernardino County households that spend more than 30% of their income on housing (Riverside County: 41%).

11,000: Number of nonprofit organizations in the Inland Empire.

$25.55: Per capita foundation spending on nonprofits in the Inland Empire.

$262.99: Per capita foundation spending on nonprofits throughout California.

$2.5 million: Amount raised from individual donors in the IE during one-day annual web-athons (Give Big Riverside County, Give Big San Bernardino County) over a five-year period.